8.10 Four Minutes Late
I keep being on the point of saying something, but then I find I can't.

All week I've been on the verge of revealing how I feel as we approach the denouement of the epic Departmental Restructure Saga but ... nothing comes out.
I open my mouth and, instead of a flood of venomous digs at managerial ineptitude, spinelessness and crassness, or an inarticulate, over-emotional tirade ending in "It's not fair" and a childish foot stamp or two, or even a trickle of measured, well thought out constructive criticism: Nothing!
Just a weak sigh, a roll of the eyes and a tiny shrug of the shoulders.

Then, this morning, during the grand Departmental Restructure Ultimate Reveal meeting the most I could manage was one limp sentence stating that LineManager's* assertion that anyone who was less than overjoyed about The Future was a change-phobic neg-head** was over-hasty and downright unfair***.

I have become battle weary and ground down.

Or maybe what's really bothering me is that after today I am powerless.
I've signed my last clock-in card adjustment and authorised my final leave slip.
I wonder how long it will be before I hear myself say: "Sorry, I'm not paid to do that".

I think I'll hate myself if I do.

On a happier note; the sky was lovely this morning.

*Or 'ExLineManager' as I shall now, rather clumsily, have to refer to him.
**My interpretation of his words, not his actual words.
***Not my actual words either (I think my actual words contained the phrase "it's not fair") but what I meant. 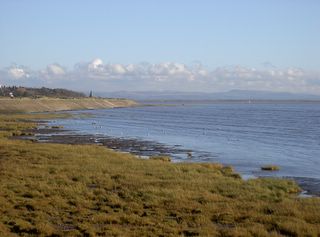 In which I inherit a digital camera, and things are never the same again.

Oh! Either that, or else the five minutes before I woke up.

Sick Day – Fountains Of Wayne
Dirty Dream Number Two – Belle & Sebastian
Reel Around The Fountain – The Smiths
Sixteen Maybe Less – Calexico/Iron & Wine
Tiny Vessels – Death Cab For Cutie
Yours & Mine - Calexico
And When She Was Bad – Cinerama
Quick, Before It Melts- Cinerama

7.31 Ten Minutes Late
Only one thing made me smile all day.

Bruce "Two Dogs" Bozsum meets the Queen.
And that was because (on Radio Four at least) it's pronounced 'bosom'.

17.12 Seven Minutes Late
Spent the day in a wind tunnel, sandwiched between Keira Knightey and Orlando Bloom, wishing I was wearing the bear suit.

And all for this!

They’re not doing Monday mornings at the moment.
It’s understandable, after all I’m not over keen myself and funnily enough the day is getting no better.

Bless Your Soul;You Really Think You're In Control?

7.31 Ten Minutes Late
GeekBoy is on the train again.
He followed his dream, but his dream turned sour, so he’s back where he was.

In a way it’s a sad story, but mostly it isn’t.

He gave it a go and it didn’t work out.
He’s no worse off and there are no regrets.
He won’t become bitter and twisted, muttering darkly about thwarted ambition, nursing half a Guinness and a grudge, until finally, spectacularly, running amok through his office. Naked, but for a daub of tippex in lieu of woad and a sword-belt fashioned from outsize paper clips, wielding an industrial strength stapler with deadly accuracy, while the neighbours shake their heads and say : “but he was such a quiet lad…who’d have thought it?”

Which is what could happen to some people.

The results were out today.
And they weren’t good.

Not for me anyway.
At least I wasn’t so distressed that I had to go home to consider my future.

It’s a tricky one and no mistake: first three thoughts.

As ever, it’s the wounded pride which is most difficult to deal with.

Thankfully I've been practicing my ‘gracious in defeat’ face.

Anyway, apologies to anyone who had their fingers crossed at any point.
I let you down there didn’t I?

Suffice To Say You Love Me, Can't Say That I Blame You

17.12 Twenty Minutes Late
But, hey, never mind, because I just found "Suffice To Say" by The Yachts and snaffled it as one of my 'free 25'.

Straight back to the Fresher's Ball, September 1980. Me, in the Refectory, snogging bonding with some first year's cousin, who'd said he knew them from College. Oh, and he also said he'd seen them supporting Elvis at Eric's.
(Am I too easily impressed?)

Think I preferred "Love You Love You" but it's been so long.

On the downside, I've inadvertently ended up with a crap live version of The Brothers Johnson "Strawberry Letter 23" ; sometimes 29 seconds isn't enough to judge....So, with only two downloads remaining ... "Reconnez Cherie" anyone?

beth @ 9:03 pm
7.31 Cancelled
8.10 Seven Minutes Late
Trotted off to the Pictures to see "The History Boys" on Friday, Alan Bennett being up there in the top two of my list of "Favourite Yorkshiremen named Alan".

Delighted to notice some subtle product placement on behalf of Seabrooks (World's Greatest Crisp). Although, when I watch it again on DVD, I will be pausing to check whether they managed to use an authentic transparent 80's style "More" than a "Snack" packet, or as I fear happened, one of those distressing newfangled foil bags.

I didn't let it spoil the film for me though.

Below are some of the things that can happen when you spend Sunday night choosing your 25 free downloads from www.emusic.com

One minute you've never even heard of a band, next minute they're everywhere (or all over this month's Word magazine at least) and you think you're some kind of expert.

You see, we saw Beirut supporting Calexico at the Roundhouse last Sunday.

At 8.00pm I knew nothing about them, although the array of ukeleles was a good sign. As was the fact that there were plenty in the audience who had obviously gone along purely to worship at the shrine of infant prodigy Zach Condon. (He's from New Mexico you know, but bizarrely sounds as though he learnt English by listening to Scott Walker under a duvet in Slovakia.)

By 9.00pm I was sold. Oh yes, Tragicomic-Post-LoFi-Gypsy is the future. Trust me.

Maybe I was seduced by the infectious enthusiasm (it wouldn't be the first time) but I hope not, because I do want Beirut to be as good as I thought they were.

17.12 On Time
Hmmm ... any positive things from today?
IneffectualManager was kind and tried his best to drag the answers from me, without once staring at my chest.

Other than that, pretty crappy actually. If I'd been asked which football team I support I think my answer would've been: "...erm, Coldplay?"

Despite being due to start at 11.00 it was 12.30 before I was 'called'.
It played havoc with my preparation; 'peaked too soon' doesn't come into it.
I'd gone beyond nerves, into tension, and through hysteria finally fetching up at icy calm, and slightly bored.
Icy calm and slightly bored is not ideal for an interview situation. Adrenalin is needed to kick-start the self-aggrandisement chemicals and remember - exaggeration is not lying.

I did get to say "I think we need to be engaging with the MySpace Generation" though. The panel looked puzzled, but they wrote it down.

Tomorrow is the interview for that job I have to get if I don't want to go backwards.

There are seven positions available. I've been doing it for three years already. Piece of piss you might think? However, there are at least twelve other people up for it. Possibly as many as twenty. This time, IneffctualManager is on the panel. I joked that I might wear something low-cut to distract him.
Now, I'm not sure it was a joke.

Charlie said I should have vodka for breakfast, because: "Everyone thinks they're great when they're drunk"
Now, I'm not sure it was a joke.

I hate stuff that matters. It undermines my natural triviality and also encourages vulnerability, which I am particularly 'anti'.

LineManager hadn't spoken to me at all, all day, although apparently he's been behaving as if last week never happened. Then he wished me "Good Luck" as he was leaving. I snubbed him. I don't think Leanne was comfortable with my display of petulance.

"So, why are you the best person for the job?"

Come on now, what did we rehearse...?

Blacking Out The Friction

17.12 On Time
"Mood Watch": Day Two
It happened again.
A different target this time, and one who was almost reduced to tears.

Apart from that, he didn't speak to any of us all day.

There are a few theories circulating. Lazy, Crazy & Madam (as appositely dubbed by Charlie) are all out of the Office for the next couple of weeks.

Theory one is that he is hormonal because he's missing Madam.
Theory two is that the lot of them have dumped their caseloads on him and we are paying for it.

Theory three is he's just a miserable, moody bastard who'll snap out of it tomorrow and pretend there was never anything amiss.